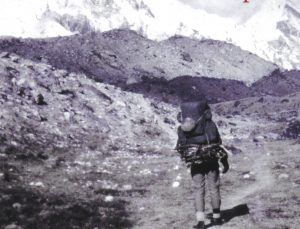 More than 50 years ago Russ Staples trekked from Kathmandu to Mount Everest in sneakers and a borrowed backpack, making him one of the earliest Americans to set foot at the 17,800 ft. basecamp.

On December 19 at 1:00 pm at the Cook Library, Russ Staples will give a book talk and Q&A answer questions about his new memoir, My Everest Odyssey. Copies of the book will be available for sale and signing.

The Tamworth native was one of the earliest trekkers to the base of Mount Everest, the world’s tallest mountain. While a Peace Corps volunteer in southern India in 1967 the 22-year old set out with a borrowed backpack, $200 in his pocket and an abundance of youthful enthusiasm that would serve him well on his often-harrowing, 27-day, 400-mile journey by foot.

Unlike Everest adventures of today, Staples’ 1967 hike was unsupported – the robust Everest tourism industry hadn’t yet arrived in Nepal. There were no planes, no hospitals, and certainly no rescues. Instead, he relied on the generosity and kindness of rural Nepali farmers and his own grit and determination. His journey took him by ancient Buddhist monasteries, through neatly terraced fields and pristine Himalayan wilderness as he walked in the footsteps of Sir Edmund Hillary and the 1963 American expedition.

Staples’ memoir is based on the journal he kept during his trek and includes incredible, never-before-published photos of an Everest and a Nepal that exist now only in the pages of history books.

Russell Staples gained his love of the mountains and hiking early in life by fishing, camping and hiking throughout the White Mountains of his native New Hampshire. A graduate of the University of New Hampshire, Russ joined the Peace Corps in 1966.
After three years as a Volunteer, then as an associate director in India, Russ returned to the States to spend a few years as a Peace Corps recruiter. He spent twelve years as Scoutmaster to the local Boy Scout troop and was a foster parent to ten boys with special needs.

After sixteen years working in the field of special education, Russ retired. He now resides in the foothills of New Hampshire’s White Mountains where he is an avid gardener, hiker and fly-fishing enthusiast.